The knowledge of Austrian economic way of thinking is a basic requirement in the education of an informed entrepreneur. Financial education and personal development are insufficient. They failed to supply the necessary knowledge to understand inescapable realities that all entrepreneurs face. Understanding of the increase in money supply, credit expansion, and business cycle are relevant economic realities that a responsible entrepreneur cannot afford to ignore without serious negative financial consequences.

Our goal in this article is to share our personal understanding on the writings of Ludwig von Mises about business cycle. And we will start with Chapter 20, Section 8 of Human Action where Mises discussed about the monetary credit theory of business cycle.

This business cycle is popularly known as business “boom” and “bust.” Understanding the cause of this cycle serves as necessary information for those who made the decision to enter into the world of entrepreneurs. 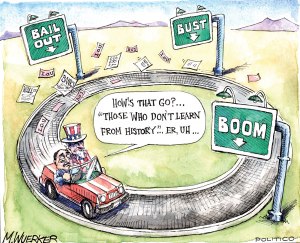 Chapter 20, Section 8 of the book provides two major explanations of business cycle: direct exchange theory and monetary credit theory. The first explanation is the dominant one and the second is coming from the Austrian school.

In the study of modern capitalism, it is popularly accepted that progress and depression characterized its history. Investigating this economic phenomenon, one can discern a general connection among the increase in the amount of capital, visible prosperity, and economic decline. The efforts of statistician to go beyond the general connection into details of business fluctuations with statistical methods are useless and futile due to the misdirection caused by mainstream interpretation.

It is evident that the Austrian school does not have the monopoly in explaining business fluctuations. Other schools of thought have their own version of business “boom” and “bust.” An example of this is the British Currency School.

The explanation of the British Currency School about business cycle is unsatisfactory in two ways: it failed to see the role of bank deposits in credit expansion and it limited its explanation of economic crisis to external source. As such, it failed to analyze the connection between money supply, lower interest rate, and credit expansion and their relationship to economic boom and bust.

Interest rates are anathema in the eyes of the public. It is considered a great barrier to production. For critics of free market, high interest is perceived as a tool for economic exploiters. Such mindset is a favorite dominant social theme for the interventionists. The state is seen as the savior from economic woes through either lowering or totally abolishing interest rates. Mainstream publication praise constant credit expansion as necessary to economic prosperity and advocate lower interest rates. Money’s neutrality is accepted as given assumption.